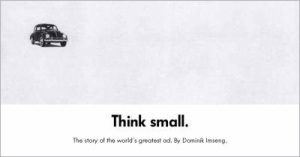 It’s a curious thing about advertising. We are in a communications business and yet when it comes to talking intelligently about what we do, we quickly devolve to either inarticulate sputtering about those ads we hate, or moony-eyed gasps and sighs about those we love.

Now Dominik Imseng, a Swiss copywriter and journalist (with a degree in philosophy) has written “Think Small: The Story of the World’s Greatest Ad”, a small (it measures 6¾” by 3½”) yet thoroughly enjoyable exploration of the people, circumstances and challenges involved in the development of DDB’s famous 1959 ad for Volkswagen.

Now first of all, is it truly the world’s greatest ad? “Ad Age” famously declared it so in 1999 in their “Advertising Century” issue, and they should probably know. And it’s certainly a staple of advertising classes and lectures the world over (I know, because I’ve given some of those lectures).

But whether its literally “the best” (whatever that really means) or merely the “most influential” (and with whom, and whether that’s ultimately what determines “best” in advertising), it’s certainly one of the most sputtered over and sighed about in the history of our business, and for that reason alone deserves the kind of dedicated treatment evident here.

Mr. Imseng begins by providing both a sufficient background of the conventional wisdom of the advertising industry at the time (with nods to Rosser Reeves and Ray Rubicam) as well as a clear-headed history of the issues surrounding the car’s birth (a project, as we know, of Nazi Germany, designed and developed by Ferdinand Porsche).

But he also provides, perhaps most interestingly of all, the context of the needs of a small upstart agency. An agency that, at the time, felt that a car account would give them the kind of legitimacy that the clients they were known for (Ohrbachs and El Al, for example) weren’t.

And of course, there are the personalities.

Like Bernbach, who, no matter how many books I read involving him, always comes off as a bit of a cipher. And Lois, who is probably the dictionary definition of “the exact opposite of cipher”. And Koenig, in many ways the most iconoclastic and interesting of the bunch. And Krone and Rand and Levenson and Gage and Hahn and Schmitz. The list goes on.

But perhaps the most interesting – and to me, new – part of the story was how they actually got the account. I had just naturally assumed it was all part of some sort of multi-agency shoot out. A “Suckers Moon” of the fifties in which the best ad – or in this case, the greatest ad – won.

But no – the way in was local. Bottom up. Koenig and Krone had done a “grand opening” brochure for Arthur Stanton’s Queensboro Motors – a local Volkswagen dealership in New York. Stanton had contacted DDB in the first place because his wife had asked his dinner guest, Richard Avedon, “Who is doing those great ads for Ohrbachs?” When Avedon said DDB, Stanton called them up. And when Volkswagen saw the work that DDB was doing for Queensboro, well, that got them in the door.

That’s how it works today, right? And why not?

Oddly, Mr. Imseng concludes the book with a “post-appendix” interview with Alex Bogusky. Conducted originally for IHaveAnIdea.org, it is included here under the auspices that the former CP+B front man is, as Imseng writes “the new Bernbach”. And as interesting as the interview is, it’s only very tangentially related to the story at hand. After such a deep dive into the mid-century world of “Think Small” it feels weirdly tacked-on and out of place. Like the subservient chicken appearing during the credits of “Mad Men.”

And while that’s somewhat disconcerting, and while some of the stories here have been repeated elsewhere, these are, ultimately, small complaints. Because as a one-stop shop for the whole story about one of the most important partnerships in our business – and perhaps the greatest ad our industry has yet produced – it’s hard to beat Mr. Imseng’s little book.

Indeed one can’t help but hope he turns his talents – as a copywriter, journalist, and yes even a student of philosophy – to some of the other great works in the canon. Perhaps an exploration of the Marlboro Man (# 3 on Ad Age’s list) or “Tastes Great, Less Filling” (rated # 8).

Or maybe even subservient chicken.

Think Small: The Story of the World’s Greatest Ad by Dominik Imsengwas published by Full Stop Press on 09/13/11  – order it from Amazon here or from Barnes & Noble here – or pick it up at your local bookseller ( find one here).