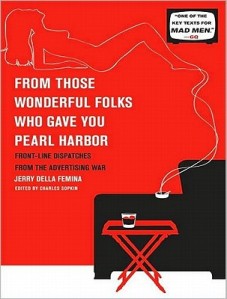 And then there’s Jerry Della Femina, creative director and chairman at the agency he founded in 1967 (Della Femina Travisano & Partners), and survivor of a litany of shops that weren’t so lucky – like Ruthruff and Ryan, Daniel & Charles, Delahanty, Kurnit & Geller, and Ted Bates – and whose 1970 memoir “From those Wonderful Folks Who Gave You Pearl Harbor” is famous even among those not in the industry as the book everyone knows the title of, but that no one has read.

With the exception, it should be noted, of “Mad Men” creator and Executive Producer Matthew Weiner.

Like Weiner, Della Femina knows that advertising is – or at least, was – perceived to be a hotbed of drinking, sex, drugs and other deviant behaviour. And the way he addresses that topic delivers an insight into what makes Della Femina, well, great.

For starters, the most salacious sections – in which he describes a variety of ostensibly degraded escapades that are beyond your most titillating fantasies of what agency life is like – are in the book’s first fifty pages. Just so you can’t miss them.

And after each one he always says “But no, really, stuff like that doesn’t happen in Advertising. Maybe at some places, but I’ve never seen it. Or at least it’s not anything that isn’t happening in other industries at the same rate.” It’s a clever boy who can have his cake and eat it too.

And that’s the thing about Della Femina; he’s very smart about how he mixes myth and fact. About using peoples’ perceptions to his advantage. Were things that wild and crazy at the shops he worked at?  Was everyone drunk by noon? Did he really pitch a Japanese company’s business with the headline that graces the cover of this book? Or does the idea of him doing it just make him and his agency much more memorable, much more distinctive, than anything he really did do?

Now if that was all that was going on in this book, I would say – as many others have said before me – that Jerry Della Femina is not really in the advertising business: Jerry Della Femina is in the Jerry Della Femina business. But the fact is, he really knows advertising. Sure, he’s crass and rude and talks about people in ways that would give even Roger Sterling pause, but the guy knows his stuff. And if you can wade through the bluster and bravado and braggadiccio (and through language that sounds like it was penned by Lorenzo St. Dubois), there’s some really smart writing about what makes advertising work, and what makes it not work.

Or this, about what makes great work:

“The average copywriter and art director never stop learning. You have to know your product so well you could go out and be a salesman for the company pushing the product. What you’re trying to do in all of this is to isolate the problem of the company – naturally they wouldn’t have switched their advertising to your agency if everything was going along fine. What you’re trying to do is to crystallize the problem. Once you arrive at the problem, then your job is really almost over, because the solving of the problem is nothing. The headache is finding out what the problem is.” (p. 166)

Or this, which is probably the most succinct, clear-eyed and honest appraisals of what makes a good advertising person I’ve ever read:

“It doesn’t really matter what you did before you got into advertising. David Ogilvy worked in a restaurant kitchen and he’s done quite nicely since. The key thing is, how much do you learn after you get into the business and then how well do you tell the consumer what you’ve learned? This is what it’s all about.” (p.175)

Because it’s never been about the drinking or the sex or the newest app or electronic gizmo du jour. It’s about how well you can communicate with the consumer.

And I’ll bet it always will be.

From Those Wonderful Folks Who Gave You Pearl Harbor: Front-Line Dispatches from the Advertising War by Jerry Della Femina was published by Simon & Schuster on 07/20/10 (and originally by on 06/08/70) – order it from Amazon here or from Barnes & Noble here – or pick it up at your local bookseller ( find one here).