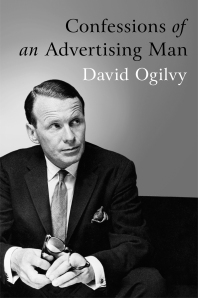 Reviewing this book is sort of like reviewing Mt. Rushmore, or the battle of Gettysburg or George Washington. Because it’s monumental.

Written in short bursts – shorter often than the copy he preferred to run in print ads – David Ogilvy’s “Confessions of an Advertising Man” doesn’t really have an arc or direction. Sure, the text is divided into chapters, each with a heading that is as provocative and compelling as a good copywriter could make it: “How to Get Clients” “How to Keep Clients” “How to be a Good Client”, and my favorite “Should Advertising Be Abolished?” They’re headlines written by a man who new the value of headlines, who, as a former door-to-door salesman knew how important a good attention-getting sentence was.

Instead, it has something else, because I think Ogilvy had something else on his mind when he wrote it. I think he was aiming higher. I think he wanted to write a book that would make advertising into a respectable business that adults could engage in with pride.

And while I wouldn’t go so far as to say that people respect advertisers today, I think there was a time when that very idea seemed less ridiculous than it does now.

Look at the language. Ogilvy writes with an elevated sense, perhaps an elitism, that probably seemed as out of place then as it does now. Can you imagine any contemporary advertising agency head quoting the old saw about “when Aeschines spoke, they said ‘how well Aeschines speaks’, but when Demosthenes spoke, they said ‘let us march against Philip’ as Ogilvy does to illustrate a point about the role of style in advertising? Me neither. But it works.

But it’s not just about language, as it never was solely about language with Ogilvy. It’s about content, and that content has to do with lifestyle. Specifically, his lifestyle. Ogilvy knew he was his industry’s own best posterboy – it’s Hathaway shirt man as it were – and his personal history was the eyepatch he could build a mythology around himself, his agency, and his industry.

So there are stories about his Scottish childhood, about his ancestry in the court of Henry VIII, about his time as a sous-chef at the Hotel Majestic in Paris, of his days as a door-to-door salesman, of his pluck and nerve to start an agency here after World War II. Stories that he weaves in and out of the advice, direction, and aphorisms. Stories that create a vast tapestry of myth and wisdom that must have been mesmerizing when it appeared during those bright days of Camelot.

And now? Will someone picking up the book today, some young creative, or b-school student looking for a career, be as electrified, or even interested? Will it do for them what it has done for countless others in the sixty years its been in print? That’s insanely hard to say.

Because the industry has changed, right? We have the internet! And cable! And social media and wicked cool phones with apps that can do everything. Yes, but there’s a case to be made that the industry may have changed back to where it was when Ogilvy wrote the book in the first place. To an arrogant ignorance about the customer and the value of advertising itself. Remember, it was so bad in Ogilvy’s day that he actually had to become famous for saying “the customer is not a moron; she is your wife”. I can think of a lot of clients and creatives who need to be reminded of that today.

But the nature of agencies has changed. They are so much more corporate now that old hands ask if it’s fun any more. And the nature of their relationship with clients has changed. One senses in these pages that Ogilvy’s clients hired him and his crew for their advice, not merely because they were more adept at whatever the “Mad Men” version of Photoshop and Flash were.

But there are truths here. Amidst the hobnobbing and the humility and the hoity-toity references, there is the kind of good, solid, smart, great-work-inspiring advice that any one in this business – and that includes clients – would be wise to review.

And that never goes out of style.

Confessions of an Advertising Man by David Ogilvy was originally published by Atheneum in 1963, and recently re-published by Southbank Publishing on 1/1/12 – order it from Amazon here or from Barnes & Noble here – or pick it up at your local bookseller (find one here).

3 thoughts on “Confessions of an Advertising Man”