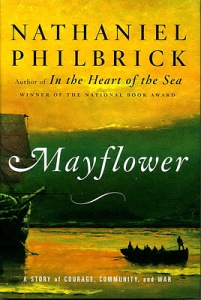 We live in an age in which we talk and don’t do (curious words to begin a review with, but bear with me). We schedule endless meetings to discuss doing things, followed by equally endless meetings in which we evaluate the relative merits of the things we decided to do, which invariably result in us reconsidering our decisions and therefore scheduling other meetings to figure out what we should do instead… and so on and so on.

It’s a wonder there are products on the shelves at all.

And yet, there are. And ads on television. And websites on the internet and movies in theatres. Even though the process in which we are mired seems perfectly designed to prohibit any of it from actually happening.

Which is precisely why an examination of how a thing was done – whatever it is – has enormous value. And on one very important level, that’s exactly what Mayflower by Nathaniel Philbrick is. It is the story of how people did something. How one group of people ended up on the rocky shore of Cape Cod, barely alive and without food, friends, or shelter. Who didn’t even have the marginal legal right that a King’s grant would have given them, because they were hundreds of miles from the Hudson River Valley they were supposed to settle. Who had a few tools – but no particular skill with them, and anyway you construct a house with hand axes in the middle of a New England winter – a term, by the way, which would mean absolutely nothing to them at the time but which would kill half of them before it was over.

Not an auspicious start to a business, was it? And remember – that’s exactly what it was. Those quaintly clothed white folks we celebrate every Thanksgiving were there because they were hired by a company of investors to settle the New World.

And you thought starting your business was tough.

Philbrick’s Mayflower has two distinct parts. The first covers everything up to their arrival in the New World – from their persecution and imprisonment in England to their flight to the Netherlands to their dissatisfaction with the Dutch, to their efforts to finance a trip to the New World, to the delays and challenges and misadventures inherent when a group of non-businessmen embark on a business adventure, to their appearance on that dismal beach. Think of this as the “start-up” portion of the story.

And then there’s the part that discusses how they changed and adapted to their surroundings – and how they forced their surroundings to adapt to them as well. And it too is valuable, a highly useful reminder that the second generation of an organization is necessarily different from the first. The challenges the founders face (creating something from nothing while not starving to death in the process) are not the challenges the next generation faces – which are more along the lines of “now that we’re not dead, how do we compete with the others around us and continue to grow?” That these successors answered that by engaging in a series of wars of annihilation upon people who were, to a great extent, responsible for their very existence is, of course, morally deplorable – although not unheard of in the business world.

In addition to these issues, Mayflower also reminds us that, yes, clients are difficult, yes, the economy is uncertain, yes, business is risky – but these misguided businessmen lived through difficulties, uncertainty and risks far exceeding anything we will face. They were three thousand miles from home – where they were hated and persecuted, and to which they couldn’t return even if they wanted to. They were dying from diseases for which they had no cures nor any comprehension. They were surrounded by people they did not understand and from whom they expected death daily. They had no skills to do what they were doing even if they had arrived at a time of year or in a place more hospitable to it. And they were virtually enslaved to the people who had funded their misbegotten voyage in the first place.

Did they make mistakes? Yes, horrible ones that we are still reaping the bitter reward of four hundred years later. Did they set in motion a pattern of behavior that would be played out across the continent for the next three hundred years? Absolutely.

But did they actually do something? Yes. And there’s something to be said for that.

And that something is “Did you?”

Mayflower by Nathanial Philbrick was published by Penguin on 04/24/07 – order it from Amazon here or from Barnes & Noble here – or pick it up at your local bookseller (find one here).

One thought on “Mayflower”