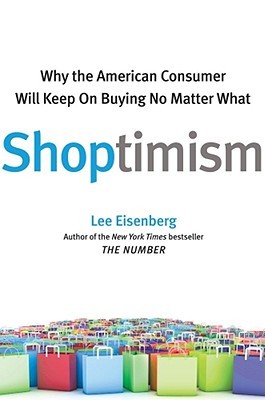 [Note: This review originally ran in Advertising Age on January 7, 2010, and is reposted here by kind permission]

Imagine you spent two years researching a book about why we shop. Imagine you spoke to researchers, retailers, advertisers, consumers. Imagine you looked at shopping from both sides now – from buy and sell, from give and take. And then, somehow, as you were writing it, the world economy collapsed and everything you’d done was turned upside down.

Starting in 2007, Eisenberg dove deep into the belly of the beast to answer the question that the anthropologist Mary Douglas asks in her book World of Goods: “Why do people want goods?” Or, to state it in the parlance of early 21st century America, “Why do we want these goods instead of those goods and what the hell can we do about it?”

Eisenberg divides his savage journey into two parts – the sell side and the buy side. On the sell side – or as he calls it the “Them Versus You” section – he looks at shopping from the outside, from the “we want goods because we’re being forced to want goods” perspective. He interviews retailers, store clerks (Eisenberg even worked the floor at Target for a couple of days to experience it up close and personal), retail consultants, academics, technologists, and scientists. All to learn why they think we buy, what they’re doing to make us buy, and/or how they think they’re going to make us buy more in the future.

On the other side (“You Versus You”), Eisenberg travels deep into the heart of darkness that is the American shopper, into the “we want goods because something inside us drives us to want them” side of the equation. He looks at the old saying “Men Buy, Women Shop” and translates “Men” and “Women” into “Martians” and “Venusians”, so he can identify “subspecies” of each that are less gender-specific (he finds nine), ultimately coming full circle by ending up at the Bem Sex Role Inventory test to help you (and him) figure out just how Masculine or Feminine your buying habits are.

As a guide through this territory, Mr. Eisenberg is friendly, engaging, entertaining and personable, even if at times a little too cute. Most importantly, however, his presence in the book serves as an important reminder that for all our abstract theories about buying and selling, it all comes down to human beings engaged in a social interaction. That said, I was somewhat troubled that someone who was in charge of the advertising and marketing for Land’s End had so little understanding of what many in the sales promotion side of our business would consider profoundly basic aspects of how stuff gets bought.

One can assume that as he neared the end of writing Shoptimism, Mr. Eisenberg saw that the economic situation that had driven all of his research was beginning to collapse, that much of his book was teetering on the brink of irrelevance, and that he needed to do something to salvage his efforts. That would explain the last two chapters feel somewhat tacked on – one about “buys worth making no matter the economic climate” and one about what makes the perfect gift. It would also explain why before publication, Shoptimism was subtitled “A Journey Into the Heart and Mind of the American Consumer”, and now reads “Why the American Consumer Will Keep on Buying No Matter What”

That subtle subtitle change, however, belies something more important. Because as I read Mr. Eisenberg’s book, I was reminded of a conversation I had with an economist this year. I asked him “When will we know this recession is over?” and he replied “When we stop asking ‘when will this recession be over?’.”

In other words, the recession will be over when we stop waiting for things to go back to how they were before. Here, in Shoptimism, is how things were before, and it looks odd. Like it was from another time.

Shoptimism by Lee Eisenberg, was published by Free Press on 11/03/2009– order it from Amazon here, or Barnes & Noble here – or pick it up at your local bookseller (find one here).