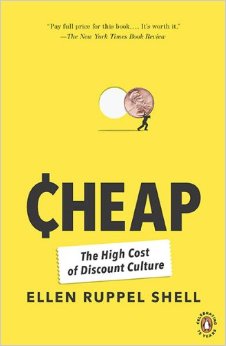 [Note: This review originally ran in Advertising Age on October 22, 2009, and is reposted here by kind permission]

My first job out of high school was in a local family-owned department store. It had about seven or eight departments ranging from toys to records to paperclips to cameras to “gifts”. It was started in the 1920s by a little old man who still came in every day, though he’d handed the reigns off to his son.

Our customers knew they weren’t getting the cheapest price when they shopped with us. But they came in nevertheless. Why? Perhaps for convenience (we were right in the middle of town), or because they wanted to support the community, or because they were comforted that the family who ran the store backed up every item they sold. Or maybe some other reason.

That store has long since gone out of business, but I was reminded of it time and again while reading Ellen Ruppel Shell’s Cheap: The High Cost of Discount Culture. For I realized not only that stores like that don’t exist any more, but that even trying to describe them to my kids meets with the kind of incredulity I get when I tell them about phones that were attached to walls, or why 8-track tapes were once a good idea.

For when Ms. Ruppel Shell talks about “cheap”, she does not mean “that which is a good value for the money.” She means that which we buy because it is priced insanely low – whether we need it or not. It is this “cheap”, she argues, that is now the driving force in the world economy. And that’s bad.

To pursue this argument, Ms. Ruppel Shell has taken an approach that gives us an appropriately complex, comprehensive, and it must be admitted, depressing view of what’s going on. For in a sense, Cheap is a Venn Diagram consisting of eleven different approaches – with “us” being the place where all those “cheap” circles overlap.

Cheap is a well-told story of how dangerously the consumer dynamic has evolved. But this focus on the actual transaction of goods-for-services begs a question – what the hell does it have to do with advertising? Advertising is about awareness, not sales. Cheap, expensive or otherwise generally only concerns advertising agencies insofar as it affects the brand personality.

So let me state the question in differently: why should every advertising executive read this book? Two reasons come to mind.

The first one is internal. If Cheap proves nothing else, it is that a race to the bottom in terms of price is always a death spiral: To think that it will be otherwise for advertising agencies is the height of hubris. Even in these economic times, your agency must sell itself to clients on something other than price – genius, dedication, lovability, shoe size, whatever. To sell purely on price – on “cheapness” no matter how you dress it up – is to play Russian Roulette with a fully loaded revolver.

The second is external. We are in the business of reflecting and refracting culture in our work; it behooves us, therefore, to never let our clients sell to customers on price. To do so uses our abilities to expand the culture of cheap, accelerating the descent into madness. Doing so educates consumers that “cheap” is the priority. As marketers, we know that “cheap” is neither the most compelling nor the most sustainable reason to purchase. It may be one of the reasons, but it is never, in the long run the reason.

And that’s a valuable lesson indeed.

Cheap: The High Cost of Discount Culture by Ellen Ruppel Shell was published by Penguin on 07/02/2009– order it from Amazon here, or Barnes & Noble here, – or pick it up at your local bookseller (find one here).