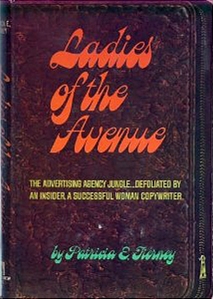 In the popular history of women in advertising, there’s Mary Wells, there’s Phyllis Robinson, there’s Helen Resor, there’s Jane Maas, there’s Shirley Polykoff. Maybe now there’s even Peggy Olsen. And for a while there was Pat Tierney whose 1971 memoir Ladies of the Avenue is a fascinating worker-bee’s journey through Madison Avenue in the 1960s.

Because what’s interesting here is exactly the fact that Tierney is not someone you’ve heard of, and that this book is probably one that even has folks familiar with the time and the industry scratching their heads

For starters, Tierney’s book is written in the heat of the moment. It’s not some long, backward-looking memoir designed to preserve or enhance her legacy or that of her agency. She never was an agency head, and thus was never embroiled in the corporate struggles that Ogilvy or Wells or the others were. She was just an angry, frustrated, funny, copywriter/CD, writing an angry, frustrated, funny screed about the business she loved. And hated. And loved. You know how it is…

Forty years on, it is still refreshingly honest, entertaining, and compelling, with an immediacy, energy and, ultimately, relevance, that make it a great read.

Tierney began her career in the traffic department of a small shop, left to become an assistant to the advertising director of a large lingerie manufacturer (who taught her “the first cardinal rule of the ad game; it is the duty of the agency’s account executive to wine, dine, and entertain the client”), and then got her first big gig in advertising proper, in the TV department at BBDO, which she describes as

“…that moment in time when TV was just being discovered as an advertising medium. And since it was such a new toy, there was no such thing as an experienced practitioner in the field. Oddly enough the greybeads in the creative department who had risen to fame and fortune on their print advertising campaigns were the must reluctant to try their hands at writing for TV. They resented the move of their clients’ money from print to TV and instead of following it, they seemed to feel that if they buried their heads in the sand long enough, the whole blinking little black box would go up in a puff of smoke.” (p.20)

Gee. Sure am glad things are different now…

Later, however, she offers an interesting perspective on the other side of the rise of youth at agencies that is as revealing as it is relevant:

“It was an age of babies, boutiques and bad-mouthing the biggies. The self-anointed wunderkind devoted almost as much energy to knocking the big agencies as they did to patting themselves on the back. They tried to equate big with bad. Bates, because of its hard-sell approach, probably was on the receiving end of more of this flak than most. But it weathered the sniping… Panasonic have just about doubled their sales every year they’ve been with Bates… [and] in 1970, when other agencies were cutting back on payrolls, Bates actually was able to add to theirs…” (p.188)

And that’s exactly what makes Ladies of the Avenue so refreshing. Not because, as the subtitle suggests it’s “the advertising agency jungle… defoliated by an insider, a successful woman copywriter”, but because, in its way, its surprisingly timeless. The names change, the agencies come and go, the decades pass, but the idiots – I mean issues – remain the same. And what is the chief issue? How do you get disparate, diverse and volatile personalities to create great, persuasive, compelling, memorable work for a public that is constantly distracted and always in a state of evolution?

Now, on the one hand, you could say that that timelessness indicates that the mission is hopeless, that advertising is an endless mix of stupid clients, smarmy account execs and lazy creatives, all slathered in a thick frosting of politics and stress – a frothy mess which in the end, signifies nothing.

Let’s wallow in that self-pity for a moment, shall we? Okay, time’s up.

Or you could tell yourself, look, it’s always been thus. And the idiots that our fathers and grandfathers and great-grandfathers dealt with were really, no different from the ones we’re manacled to. Hell, they’re probably wearing the same clothes.

And if our forefathers and foremothers could figure out a way through the chaos in their time and still created great work, then who are we to throw up our hands at ours?

Ladies of the Avenue by Patricia Tierney was published by Bartholomew House in 1971 – order it from Amazon here or from Barnes & Noble here – or pick it up at your local bookseller ( find one here).