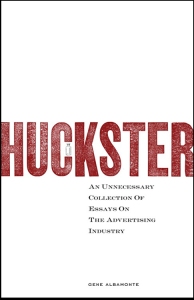 Advertising agencies are curious things. In spite of shows like “Mad Men”, “Bewitched”, “Thirtysomething” and even “Bosom Buddies”, the distinctive perfume of desperation, panic, frustration, and creativity, mixed with more than a soupçon of politics has rarely been adequately communicated. And it’s a shame because its really one of the most consistent things about the industry. Exhume Leo Burnett or Claude Hopkins and drop them into an agency up all night furiously finishing work for a make-or-break pitch and I will bet dollars to doughnuts that they will instantly feel right at home. Ask George Lois, ask Julian Koenig, ask Jane Maas. Hell, I’d even be willing to bet it’s probably true around the world. Drop any one of them in some tiny agency in the most rural part of Thailand, an agency that’s dealing with crazy clients, ridiculous timelines, and close-quarters dysfunction on a level that would make “Real Housewives” producers drool, and they’ll say “Yeah, I’ve been here before.” There’s a tone of voice, a mode of interaction, a manner of discourse that I have only found at agencies, and I have found it at good ones and at bad ones, at big and small alike, creative-driven and otherwise, and across all manner of expertise

And while I can’t exactly describe to you what it is, I know it when I see it. I saw it in Jerry Della Femina’s “From Those Wonderful Folks Who Brought You Pearl Harbor” (reviewed here) and I see it in Gene Albamonte’s “Huckster: An Unnecessary Collection of Essays on the Advertising Industry”. And that is to both the latter’s credit and detriment.

In this slim volume Albamonte, a copywriter, humourist and fiction-writer, covers forty topics (well, 37, if you don’t count a QR code that leads nowhere, some “coupons” and a few Dmetri Martin-esque charts), all in the space of fewer than 150 pages. Some of it is quite clever. “The Worst Kind of Client” on p. 57 is a very smart turn on an advertising cliché that everyone in the business is familiar with. “First Lines of Classic Novels Written as if their Authors had Worked in Advertising” is actually quite wonderful and the kind of parlor game you can see yourself playing late at night in the office when you should probably be working (“Mother died today. Banner Ad. – Albert Camus, The Stranger”). And the “Yankee Candle Scents for Advertising Professionals” on p. 109 is brilliant. So brilliant, in fact, that I bet I hardly have to tell you where it goes, do I?

And that, frankly is part of the shortcoming of “Huckster”. The pieces are often just scenarios, set-ups, concepts; the kinds of things that you’d pitch to your CD who’d tell you which ones to flesh out. They are canny first draft riffs that don’t so much end as run out of steam or simply stop, as if he were writing them on the subway and, whoops, there’s his stop, gotta jet, fill in the rest later. Or not. One wishes Mr. Albamonte had spent time expanding some of these pieces, had explored some of the ideas inherent in the premises, and in the process, probably reworked some of them so they really shone. You know, all the stuff you don’t usually get the opportunity to do when you’re working at an agency.

That said, there are still clever moments, and Albamonte has the kind of nice turn of phrase and good sense of the absurd that one would expect from a successful writer in our business. And if some of the pieces are probably only funny to copywriters (for example “First Draft Taglines” which asks “Did you know that Volkswagen’s ‘Drivers Wanted’ tagline was originally ‘Get in the fucking car’?” will make all writers laugh out loud), that’s actually part of the appeal. Because over all, the picture he paints of advertising agencies from the inside out is recognizable to anyone who has ever found himself locked in a brainstorming session at two o’clock in the morning on a holiday weekend with people you would much rather kick in the eye. The snarkiness, the cleverness, the “over-educated-and-underpaid-ness”, the attention-deficit-disorder-ness. The bad food, worse smells, and even worse ideas, punctuated by the phone calls and text messages from outraged lovers and other strangers.

Huckster by Gene Albamonte was published by Shallot on 06/15/12 – order it from Amazon here or from Barnes & Noble here – or pick it up at your local bookseller ( find one here).