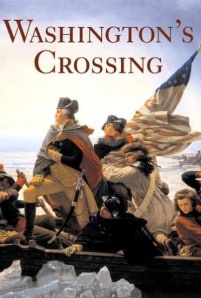 There is a man on a boat in a painting in a museum. And he is there for two reasons.

The first reason is because the man in the boat is George Washington and the boat he is on is crossing the Delaware River on Christmas Eve. And he is crossing that particular river on that particular day to launch a surprise attack on the British Army – an army that had been kicking his ass pretty solidly halfway across the United States for over a year.

But that wasn’t the worst of his problems that night. Due to the way the army was organized, the conscription of a substantial number of his recruits was going to end in about a week. Which means Washington’s little army was gonna get drastically littler. Not that you can blame them – not only were they getting their asses handed to them by the most powerful army in the world, but they also weren’t being paid regularly, were literally starving due to bureaucratic screw ups and large portions of wartime-profiteering, and were freezing to death in the worst winter America had seen in years.

And you thought you had troubles.

What Washington needed – to keep his army around him, to convince Congress not to throw in the towel and literally hang him out to dry, to encourage foreign nations to send some cash soon, and, oh yeah, to defeat the enemy – was something big. Something memorable. Something that would inspire his troops to keep being his troops in spite of clear-headed logic. He needed a big win and he needed it immediately.

So he and his generals hatched this crazy idea. “Crazy” because in the 18th century, there were rules and traditions that one recognized and enforced during a war. And one of these was that as the year drew to a close, you all found winter quarters and the war went on a sort of “hiatus” until spring.

Now, this may seem quaint and cute, but there were some very good reasons for it, not the least of which was that moving an army around in the middle of winter was a nightmare. Roads, if there were any, were a mess of mud and muck and goo – which made moving cannons and other large machinery virtually impossible. Plus, in the 18th century an army didn’t carry its food with it like they do now; they foraged in the fields (a polite term for “stealing”) or, barring that, bought it directly from farmers. And because you don’t find a lot of food sprouting up in Eastern Pennsylvania in late December, the farmers (who were worried about starving themselves) were loathe to give any up in exchange for some virtually worthless U.S. cash.

So it’s a measure of just how desperate and how big a roll of the dice this crossing was for Washington by the fact that he tried it at the worst possible time to try to move cannons or men. The upside, of course, is that the British (or more precisely in this case, the Hessians – German mercenaries who were fighting for the British and were camped in Trenton) knew how ridiculously difficult such an attack would be, and so wouldn’t be expecting it. In the same way they also wouldn’t be expecting monkeys to crawl out of their asses either.

And this, frankly, is what makes David Hackett Fischer’s Washington’s Crossing such a masterful work. Not only because he bursts the myths that have been fed a generation (like, for example, that the Hessians were drunk and hungover from holiday celebrating. They were not. Not even close), but because the story he replaces the myths with is so remarkable, so inspiring and so, at times unbelievable, that you will read in awe. Why? Because, in short, just about everything that could go wrong did go wrong, in spite of the planning and research and the commitment and importance. And yet they pushed on and somehow, succeeded. All of them. Together. And if that’s not a message for our times, I don’t know what is.

Oh, and the second reason Washington’s on that boat on that river on Christmas Eve? Because in 1850, German-born painter Emanuel Leutze painted him there as an inspiration for the people of Europe who had risen up in the famous 1848 revolutions – and had not been successful.

In other words, Leutze painted “Washington Crossing the Delaware” to inspire people to act.

Washington’s Crossing by David Hackett Fischer was published by Oxford on 02/01/06 – order it from Amazon here or from Barnes & Noble here – or pick it up at your local bookseller (find one here).