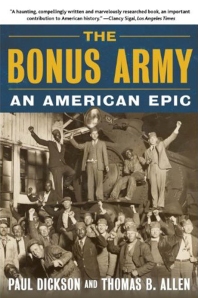 Once upon a time thousands of people who felt they’d been forgotten by the American Dream descended upon an American City to assert their legitimacy and to force the nation to ask itself questions it would rather not ask.

You know – the Bonus Army. The what?

After WWI, Congress voted returning veterans a “bonus” for their overseas service – to salve the financial wounds of men who had left their jobs to defend their country and who had come back to a job market full of, as they saw it, guys who’d stayed home and gotten rich off the war but who wouldn’t hire them back at their old jobs. The fact that the bonus became law goes some way to explaining just how guilty some of these stay-at-homes felt.

But instead of giving the vets actual cash, they issued certificates – roughly a thousand bucks per vet – that could be redeemed twenty years after the 1925 law was passed. In other words, just as World War 2 would be ending. Nice, right?

Of course, nobody had any idea World War 2 was on the horizon. And you know what else they didn’t see coming? The Great Depression. And during it, you had all these vets who had lost everything except these certificates, which were more or less useless for another ten to fifteen years. So they began to petition the government for some kind of compensation, even if only pennies on the dollar. You know, so they wouldn’t die in the streets.

And that’s when men started showing up in Washington D.C. And then their families. Eventually there were upwards of 40,000 of them. Kind of like Occupy Wall Street, except bigger. And except it doesn’t end as well.

Because the FBI (under their new chief, J. Edgar Hoover) believed that the Bonus Army was run by Communists – though according to Dickson and Allen while there was the endless infighting that is endemic to any large organization, there does not seem to have been a clear political agenda, Communist or otherwise. You know, like Occupy Wall Street.

The FBI fed their theories to the Army, many of whom had served in Germany with the men in the camps – and who had witnessed the post-war street battles between the Communists and the government. And one day the Army – led by future American heroes Douglas McArthur, George S. Patton and Dwight Eisenhower – decides enough is enough and burns down the camps. 40,000 starving people gone back to where they came from. Just like that.

Except not quite. Because some of the vets had nowhere to go and end up at CCC camps in Florida. That is, until a category 5 hurricane wiped out them and those camps over Labor Day weekend. The ocean was washing up bodies for a long time afterwards. (You can read what Hemingway – who was on the scene and whose previously unpublished photographs appear in this book – wrote about it here)

Dickson and Allen do an admirable job explaining the whole convoluted, complicated, contradictory story of this more or less forgotten moment. From America’s historic treatment of vets to the generational infighting in Congress to the marches that crossed the country to the camps to the fires to the rotting bodies on the beaches. And if it gets a little confusing at times, well, it’s a confusing story, painted on an enormous canvas involving issues we’re still struggling with, and played out by figures who will dominate American history for decades to come.

Incredibly, it ends on a positive note. Because do you know what the legacy of the Bonus Army is? The G.I. Bill. Not because these were the demands of the Bonus Army, but because someone had the sense to figure out what lead to the Bonus Army. That after a war, lots of guys come home and they can either sit on the front lawn of the White House, or they can create an economic engine that will drive the wealth of the planet for the next sixty years.

And what does any of this have to do with marketing? Just this: Sometimes the message comes early and sometimes we completely misread it because we apply the lenses of the past to a harbinger of the future. Generals are famous for fighting the last war over again.

The Bonus Army by Paul Dickson & Thomas B. Allen was published by Walker on 03/21/06 – order it from Amazon here or from Barnes & Noble here – or pick it up at your local bookseller ( find one here).