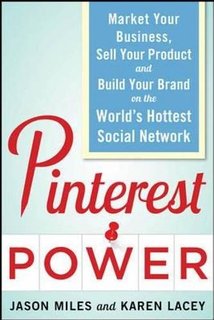 In his 2000 film of Nick Hornby’s 1995 book, John Cusack makes an observation that, in the context of the movie makes perfect sense, but that, when considered outside of it, actually goes against everything we are taught. And yet is still fundamentally true:

In other words, the things we accumulate and accrue say more about us than what we actually speak about ourselves. Actions speak louder than words, as it were, except with things. Idris Mootee takes this even further in the 60 Minute Brand Strategist, when he says that brands help us give our lives meaning. And Pinterest founder Ben Silberman agrees. “What you learn about a person through their collection” he is quoted in Pinterest Power as saying, “is very true to who they are”.

Nowhere are these insights perhaps truest – or at least most obviously displayed – than on Mr. Silberman’s Pinterest. Founded in 2010, its valuation five years later was $11 billion with over 100 million users worldwide. Not bad for a site that’s just a digital storage locker for people to collect things that intrigue them. Which makes it sound remarkably like your Amazon wishlist, right? But considers this; your Amazon wishlist is essentially inward looking, a way for you to tell you (and, let’s not forget, Amazon), what’s important to you. Pinterest, as Pinterest Power reminds us, is outward looking – and that makes all the difference.

Indeed, the recognition of the functional expression of this difference is what makes this book really valuable. And maybe it’s not a revelation to you, but it is to me. Because that observation means that for all practical purposes, Pinterest is really just a display ad network. You pin your pictures, they get picked up by other pinnners, who pin them on their boards, creating the opportunity for that second level of consumer to go back to your site/brand/pin.

Which is essentially how a display ad network works – for Nike or Ford or Proctor & Gamble or any advertiser who wants their messaging to show up in the right places all over the internet.

Except Pinterest makes it available to individuals, small businesses and startup entrepreneurs.

And that’s revolutionary for two important reasons. On the one hand, it puts incredible promotional power into the hands of literally millions of people – people who, in previous generations could never afford to disseminate their message as cheaply and quickly and efficiently as they can now (in truth, it’s more efficient than traditional networks; those are fueled by money, these are fueled by the passion of like-minded individuals to other like-minded individuals, increasing both their legitimacy and effectiveness).

But it’s also revolutionary because it demonstrates how fundamentally different Pinterest is from the other forms of “social media” it is usually lumped in with. Sure Twitter lets you post content and images, but its function is not, practically speaking, as an ad display network – that is, to use your image on someone else’s site to drive awareness of your brand. Pinterest’s is. Facebook doesn’t function that way, nor does Snapchat or Instagram or Foursquare or whatever was created while I was writing this sentence. That’s because each are distinct and different tools that can accomplish distinct and different tasks – and marketers would be wise to stop pretending they’re all just variants on the same theme. And if they did, it would be revolutionary.

In spite of these important observations, however, Pinterest Power has some flaws. A substantial amount of it feels like a promotional piece for the authors’ companies. Additionally there are long digressions on the value of using direct mail and how to craft it. And finally, perhaps because Pinterest has historically had a large craft and micro-business skew, much of Pinterest Power is concerned with the kind of fundamentals of marketing that will seem highly elementary to most marketers. And while we believe, as we have said in other reviews, that these principles can never be repeated enough, many readers my find the authors’ enthusiasm for them far exceeds their own.

Thus Pinterest Power is something of a mixed bag – on the one hand, a useful primer for the professional marketer looking to make sense of a valuable new media, on the other hand, a marketing 101 class for home businesses. And while both of these are worthy efforts, they tend to get in the way of each other making Pinterest Power less impactful than it should have been.

Pinterest Power by Jason G. Miles & Karen Lacey was published by McGraw-Hill Education on 10/09/12 – order it from Amazon here or from Barnes & Noble here – or pick it up at your local bookseller (find one here).