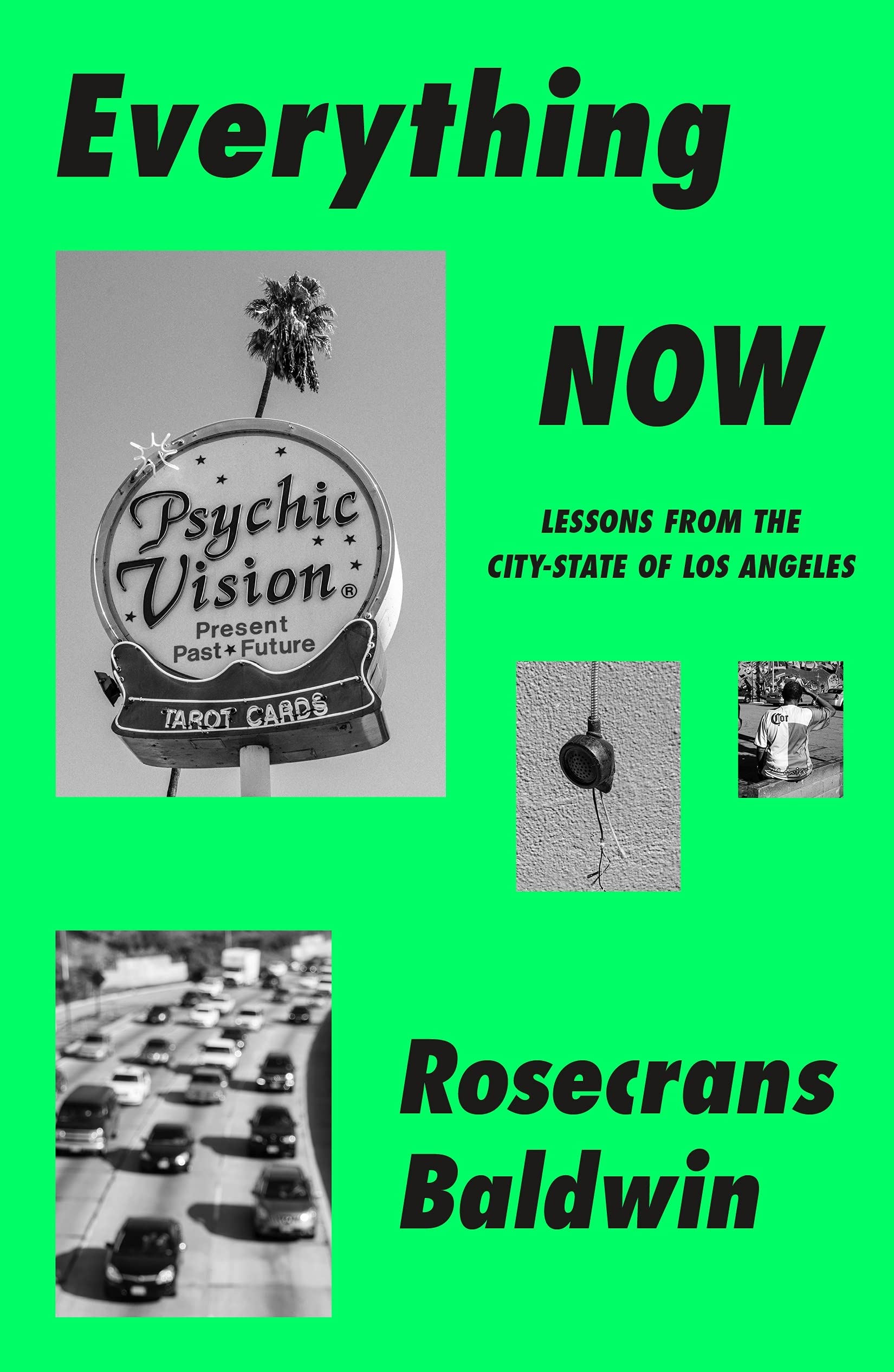 I feel like that in Los Angeles all the time.

So I seek out books like Rosecrans Baldwin’s Everything Now, not so much for an answer (“Oh! So that’s what Los Angeles is! Now I get it!”), for that would be an unfair burden to place on any writer about any city. Every city is really many cities and as Baldwin makes clear, that’s exponentially true of Los Angeles. Instead, I seek these books for clues, for hints, to hear those mystic chords in someone else’s music that will lead me to believe well, if this is not actually the answer, at least it’s resonating for them like it’s resonating for me, and that’s something. But I do not know.

I do not think Rosecrans Baldwin does either. Hell, I’m not even sure he is drawn to Los Angeles at all or if he simply rode a bus there and started writing. But these things do not detract from the value of his fine book. A book which, like the city itself, goes in many directions at once. Some of them are perhaps more expected: Here he is in Skid Row talking to people trying to untangle homelessness in a city that has recently made the very act of being homeless illegal. Here he is with the Point Dune Bombers unpacking the wreckage of fires that have once again destroyed a land that was deemed high risk, but in which 85,000 new homes were built in the past 20 years. Here he is watching a struggling actor rise up through the ranks. Here he is enduring the taunts of the moderators of the kind of marathon confessional therapy weekends that LA is regularly pilloried for.

And yet, here he is also illuminating the unexpected. The tale of the native Tongva people which ends, as it seems all native stories in America do, with genocide. And the tale of a thriving mid-century black middle class in Sugar Hill, which ends, as all black middle class stories do, with obliteration in the name of urban renewal (“Welcome to the Santa Monica Freeway!”). And the tale of the city’s deep and camouflaged Southern roots, legacy of the migration of whites here from the 20s through the 60s, which ends in a militarization of the police force that becomes, you should forgive the expression, the spearhead for the rest of the nation.

And through it all, here he is making the case for Los Angeles as not a city at all – but as a city-state. Which is not hard to imagine frankly, with its uncommon culture, sprawling geography, unique politics, enormous economy and vast ecological footprint (approximately equal to the size of California, Arizona, New Mexico and Texas combined). It could already be a Singapore, an Athens, a Monaco, a Firenze and we just haven’t noticed it yet.

These different directions, these attempts to notice everything and make sense of it all, do give the book the feeling of something like a collage. More a collection of observations and less an equation to prove an argument. And yet amidst all the deep reporting, all of which is useful in some way, shape, or form, there were two observations that resonated, that pointed, despite Baldwin’s respect for the complexity of this city, to something that could point to an answer. One came from a nineteenth century president:

And one did not:

The first reminds us not to kid ourselves; Los Angeles really does occupy a different space. It is no more like Dallas or Denver than it is like Philadelphia or New York. It is something else, something beyond. And while we may be forgiven if we categorize it by simple geographic terms – as we always have – that does not make it right. West of the west? What is west of the west? Especially in a place where the next stop is East?

And the second reminds us that despite that, LA is still an American city somehow. It is more like Houston or St. Louis, than it is like Tokyo or Paris or Mumbai. It is because, as the book points out again and again, the American truths are visible here.

Except. Except that while they are, I am increasingly of the opinion that they are expressed in a language we do not understand. That we have never understood. That like those computers, it is talking in a language only it grasps, which we must teach to ourselves to understand what the hell is going on. This language of a place that is west of the West. That is filling up the spaces in my dreams and in my head. That beckons to us on buses still.

But I don’t know.

Everything Now by Rosecrans Baldwin was published by MCD/FSG on 06/13/2021 – order it from Amazon here, or from Barnes & Noble here, or pick it up at your local bookseller (find one here).