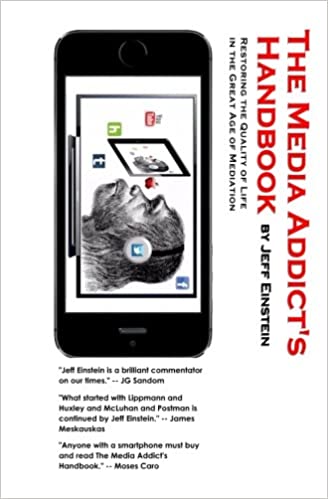 So Mr. Einstein’s observation that we are media addicts is not necessarily new. But what is new is the question that begins to bubble up deep in the book, whether Mr. Einstein intended it or not. A question that is making us rethink some fundamental beliefs we had about digital marketing. And the question is this: If we are addicted to digital media (websites, social media, whatever) so profoundly that we cannot walk down streets without our noses being buried in it, that it is the first thing we turn to in the morning and the last thing we engage with at night – if we are literally addicted to it, then perhaps we should shift our thinking about users from, well, healthy, rational creatures, to addicts.

And what do addicts do? Well, they spend all their time serving their addiction.

They don’t act in their own best interest. They don’t use rational decision-making systems to provide for their own good. They are simply vehicles for serving the addition. And anyone who has read any William S. Burroughs or Hunter Thompson can verify that.

So then, if digital media is the drug, if digital media is the thing consumers are addicted to, then logically, what is the value of a click or a like if it’s really just a junkie getting his junk? If all we’re proving is that the clicking person is addicted? That our particular ad has motivated the junkie to act more than another ad? Perhaps. But that their click indicates an intention to buy our product or service?

Now, you could argue that digital advertising is still the interrupting force within the content that digital junkies are craving. And therefore, if it’s able to interrupt that flow of junk, well, then, it must have done something, right? Maybe. But what? Did we convince them to buy our product, or simply provide people who like to shoot up a slightly shinier syringe? And if the latter, well, is that really worth what we’re spending?

(Now if you don’t like what I’ve been thinking so far, hang on, because you’re really not going to like where I’m going next.)

If clicks and likes are just expressions of the addiction of digital media junkies, and therefore, not really valuable in any meaningful way to marketers (unless, of course, that click makes a real purchase – and doesn’t simply lead you to a website where you have to fill out a form and provide your credit card, and and and…), then what is the value of digital advertising? Yes, it’s the advertising that happens where increasingly more and more of us are spending more and more of our time (more than 12 hours a day in a recent study), but just because you’ve posted your message where someone is doesn’t mean it’s working, right?

Or does it? Because that’s exactly the way we think about traditional advertising, right? I’m watching a soccer match and there’s an ad during the game because some marketer somewhere knew someone would be watching it. I’m driving down the highway and I see a billboard, because the media company convinced the client that their customers would see it. I’m reading a newspaper and… well, okay…

Traditional advertising has always been characterized by placing ads where people have proven to be congregating – but with absolutely no measurement about conversion or purchase.

So maybe we should stop thinking about digital ads this way as well. Maybe digital ads are a lot more like traditional ads than we thought. Maybe their value is the way they remind the viewer of your brand or product when they visit a favorite website – just like they did when their parents watched a favorite tv show. And clicks or likes are just a bonus. A “Lucky Strike Extra” as my father might say. And an actual sale? A gift horse into the mouth of which one should never look.

Maybe we should be measuring digital ads as we measure those other forms of traditional media – as ads that exist amidst the content our target is interested in, and to which their eyes occasionally roam, to remind them we exist. And that’s it.

Not only does this idea speak to how people actually engage with digital media – I’m here on the ESPN page checking out the latest trades and oh yeah, there’s an ad for AT&T – but it’s also just as legitimate whether we’re characterizing the people we’re talking to as addicts who can’t help themselves or as humans who are just engaging with media as humans have for centuries.

Or maybe not. Maybe clicks really do mean something. And maybe Mr. Einstein is wrong and we’re not addicts hopeless hooked on all forms of media, digital especially. Although, that possibility should make the blood of every media planner – and creative and client as well – run colder than a junkie shivering through withdrawal.

The Media Addict’s Handbook by Jeff Einstein was published by JPEinstein on 09/30/2013 – order it from Amazon here or Barnes & Noble here – or pick it up at your local bookseller (find one here).