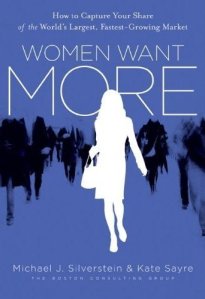 In Season One of AMC’s “Mad Men”, Don Draper asks Roger Sterling “What do women want?”, to which Roger famously answers “Who the hell cares?”

Michael J. Silverstein and Kate Sayre – both partners at Boston Consulting Group – have a different answer, based on an exhaustive global survey BCG executed involving over 12,000 women in 21 countries (exhaustive, though one must observe an apparent thinness of coverage in Africa and Latin America). Their answer serves as the title of their book – “Women Want More”.

The book is broken into three sections. The first – and I believe, the most successful – is “The Female Economy”. It is packed with facts gleaned from the survey, as well as other sources, that no marketer should be without. That women control or influence over 64% of purchases worldwide and over 72% in the U.S. That they earn about $12 trillion in the workplace and control about $20 trillion in consumer spending.

But their study also reveals important psychographic insights, about what women’s most important values are, how women tend to rank themselves in terms of priorities, what women say they are willing to pay more for and what they are not. These are useful insights that any marketer should pay attention to.

To better understand this data and to contextualize it to a degree, Silverstein and Sayer divide their respondents into six distinct archetypes: Fast Tracker, Pressure Cooker, Relationship-Focused, Fulfilled Empty Nester, Managing on Her Own, and Making Ends Meet. These, as their titles suggest, are defined to a large degree by age, income and lifestage, and allowed Silverstein and Sayer to create a sort of shorthand for analyzing the effectiveness of various brands, companies and even industries.

This then led them to identify a set of four practices that they have observed in companies that are successful when marketing to women, and that they believe can lead other companies to the promised land. They refer to these as the 4Rs – Recognize, Research, Respond and Refine.

Now, one could argue that these are four practices that a company should follow to engage ANY customer, regardless of gender, race or shoe size.

And that raises, I think, an interesting point – one that may be outside the original scope of the research report, but ought not to have been outside the scope of this book. Namely, what is the context? Are these insights truly unique to women? For example, do the 4Rs not apply to men? Or take it a step further – Do men not want more? Silverstein and Sayre say that women want more money. That women want more power. That they want more time. But who – whatever their sex, economic standing or geopolitical placement – doesn’t?

Now, it could very well be that men want something completely different. For all I know, they may want less (research that I’ve seen would indicate this is true in the apparel industry). And I would be willing to believe that most marketing since the dawn of time has been geared towards what men want. Therefore, if men want something different than what women – who control the majority of the purchasing in the world – want, understanding that difference would give anyone with ears to hear a distinct competitive advantage.

In 1955, David Ogilvy famously explained that the consumer is not an idiot, she is your wife, signaling something of a sea-change in marketing. In “Women Want More” Silverstein & Sayre seem to say that not only is she not an idiot, she’s also not you. Would that they had given us a little more.

Women Want More by Michael J. Silverstein & Kate Sayer was published by Harper Business on 09/08/09  – order it from Amazon here or from Barnes & Noble here – or pick it up at your local bookseller (find one here).