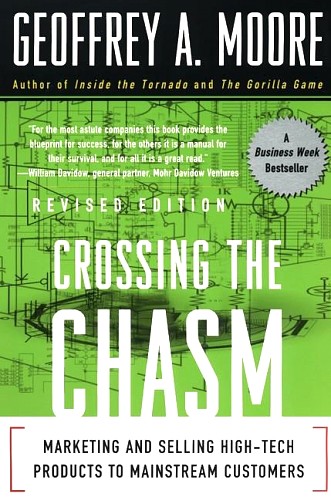 There is in marketing a tendency towards monolithic beliefs. It’s probably true in any system that is constantly under attack by change – religions, nations, families – but it’s certainly true in this business, where authors, agencies and other adepts are always pronouncing some sort of “big unified theory of getting people to buy stuff” that, of course, is proprietary to them and is virtually guaranteed to work for you.

One of the most monolithic of these beliefs concerns consumers. Consumers were, if not monolithic, at least reliable – if you had a reasonably decent product, and you had lured them into trying it, then you could walk them, via various marketing tactics and with some subtle tweaks over time, from the initial timid “trier-outer” through the “oh yeah, I tried that and it didn’t suck”-er to the holy grail “I buy this stuff all the time and I love it”-er.

Why did we think this? To keep us from losing our marbles.

Because the alternative leads one down the path of accepting that everything is changing all the time. That the market situation we are being handed IRI data on this morning is inaccurate because so much has happened in the time it took to compile and understand it. Somewhere a consumer got a lousy package of our product and is now telling all his friends that we suck. Somewhere a distributor is cutting a deal with a local chain that is putting our competitor at the front of the store. Somewhere a new TV show is becoming a hit and the ads we were given on it as a make-good for something else are about to blow up.

And that last one is where Geoffrey A. Moore’s seminal and highly influential book comes in. Because the “chasm” he identifies in “Crossing the Chasm” is between what were often identified as two stages in the development of one consumer, but which are in actual fact two entirely different consumers.

The chasm that Moore identified was between the initial “trier-outers”, those early adopting visionaries, and pretty much everyone else. Because, and here’s the insight that makes the book so remarkable and therefore so valuable, your next customers don’t look like your last customers. That is, what appealed to those first people who help you get off the ground is – almost by definition – not what is going to appeal to the next, much larger, group that will buy you once that first group has moved onto whatever’s next.

If Moore is right (and I believe he is) and if one believes (as I do) that a brand exists in the consumer’s head and is not something that we as marketers can force down his or her throat, then what Moore’s observation practically means is that a marketer must be constantly on the lookout for their brand’s identity – because the audience that is deciding what it means is changing with each passing day.

And the worst part about this observation is that it makes all the sense in the world. We choose products based on how they make us feel and those who use something before everyone else do so precisely because they are ahead of everyone else. As soon as others are on-board, they’re less interested – partially because they derive their own sense of uniqueness from their ability to be ahead of the curve. Which is a quality that holds almost no value whatsoever for the next group – a group who actually value the fact that others have already tried it and, to a certain extent, validated and authenticated it.

One can see how this would be extremely valuable for marketers in the high-tech industry. But that’s only because the lifecycles of technology products are so obviously shorter and faster. So don’t kid yourself. “Crossing the Chasm” is valuable to anyone marketing anything to anyone today and if you don’t figure out how to cross the chasm quickly and repeatedly, you will invariably find yourself gazing into the abyss.

Crossing the Chasm by Geoffrey A. Moore was published by HarperPerennial in 1991 – order it from Amazon here or from Barnes & Noble here – or pick it up at your local bookseller (find one here).