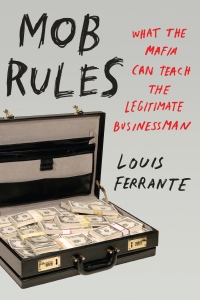 Even before the economy went south, Louis Ferrante was not the first person to see the similarities between big business and organized crime. And, truth be told, he’s probably not the last. But as someone who was running a chop shop in his teens, hijacking trucks before he was twenty, and who ran his own crew inside the Gambino crime family – and then spent eight years inside a Federal penitentiary for refusing to name names – Ferrante may be the most qualified. Or at least, he may be the one I’m not going to argue with about the finer points of his observations if we bump into each other in a bar in North Jersey or a social club in Queens.

Mob Rules is Ferrante’s eighty-eight “lessons” for business leaders drawn from a lifetime of experience in organized crime. As a result it’s really two books – one, advice and observations about how to run a successful business (from employee motivation to networking to branding) and the other, a collection of colorful anecdotes about the characters and crimes and culture inside the mafia.

Now that may sound like a prescription for literary whiplash, but Mr. Ferrante balances the mixture in such a way that the two “books” illustrate each other simply and cleanly. And while that works on one level – Mob Rules is a quick read and moves along briskly – unfortunately, it also means that you really don’t get much depth from either topic. The business advice, for example, isn’t particularly earth-shattering – no one who reads Mob Rules is going to find anything that isn’t in literally dozens of other business books. And the crime anecdotes, while entertaining, are so brief that they become cartoonish – which actually somewhat undercuts Mr. Ferrante’s premise (if these guys are cartoons, why the heck should I take business advice from them?).

That said, there are two reasons why I’m not going to dispute Mr. Ferrante’s basic premise, that the guys running organized crime are smart businessmen. First, anyone who can successfully run a multi-billion dollar corporation across cultures, timezones and decades isn’t doing it just on luck. Or, frankly, just on the threat of physical violence. There are bound to be some sound business lessons to be learned. And because of this, one wishes that Mr. Ferrante had gone for quality over quantity – digging a bit deeper into some of the practices and the thinking behind them. Admittedly, that would have made this a different book than it is – and perhaps not the book that Mr. Ferrante would have felt comfortable writing – but the result probably would have been a little more useful to the business reader.

Instead Mr. Ferrante seems to have gone in the direction of the “handy guide”, and to facilitate that approach, Mob Rules is divided into three parts – “Lessons for Soldiers” (or “employees”, if you’re not familiar with the language of La Cosa Nostra), “Lessons for a Capo” (middle management), and “Lessons for Dons” (the bosses) – each packed with relevant advice and stories.

Ultimately, however the book’s value lies in the very titles of the lessons – “The Mafia Spends Very little on Office Supplies: Cutting Overhead” for example, or “The Toughest Guys Have the Thinnest Skins: Never Embarrass Someone in Public” – the kinds of things that, even if you don’t read the whole lesson, will stick with you, that you can use around the office quickly, easily, and memorably.

Because as we said, no one is going to pick up Mob Rules thinking they’re getting the latest insight from Jim Collins or a lost Peter Drucker manuscript. They’re looking to be reminded of some basic truths, in a form they can polish off on a plane ride or a couple of commutes. And what’s wrong with that?

Oh, and the second reason I’m not going to dispute the intelligence of Mafiosi? Do you really think I’m going to call anyone in organized crime stupid? In print? What’re you, nuts?

Mob Rules by Louis Ferrante was published by Portfolio/Penguin on 6/2/11  – order it from Amazon here or from Barnes & Noble here – or pick it up at your local bookseller (find one here).

One thought on “Mob Rules”